Did you know that catheters really do make it impossible to know if you’re peeing? I can’t feel this shit even a little.

To the stout young nursing staff who have been charged with hauling me from stretcher to bed to stretcher to scary full-body x-ray table and back again, I have repeated one sentence more times than I can count: J’ai monté un arbre. I climbed a tree. The grammar’s okay, but people always blink a couple times in confusion. The French just don’t understand this tomfoolery like backwoods Oregonians would. Regardless of whether it’s a decidedly Oregon trait or just my own personal adrenaline fixation, it is something that I have done, do frequently and will continue to do until I am too ancient or too boring, in spite of where I am now: in a French hospital bed wearing thigh-high circulation stockings and a catheter. Four nights ago I was in good company, rabbling about the gold-dusted cobblestone streets of Vieux Lyon after midnight, when lo! thern Orgun kids didth spyieth yon climbin’ trees. I leapt on with gusto and monkeyed about in joy, swinging from branch to branch and watching the twinkling lights of the city beyond. On coming down, I swung from a branch intending to catch myself on one just below, but this here branch was weak as one particular ex-boyfriend’s bad excuses. The tree became the second thing in a month to let me down hard.

The first night here was an utter shitshow. Riding in an ambulance over cobblestones with a broken spine is not something I would particularly recommend; the pain was so blinding that I fantasized a serial killer/armed vagrant/angel of mercy would appear behind me and blast my head through with a small pistol. This seemed at the time to be the easiest, cheapest and most sensible option for everyone.

Unfortunately the medical staff did not agree, opting instead to shoot me with copious amounts of morphine and other drugs and prepare me for a full body scan, which I would wait three hours to go through. My only vision was that of the immediate ceiling before my face, which was falling into various stages of decay. One might say that the sole downfall of the socialist healthcare system lies within its decrepit graffitied hospital buildings (I asked my attendants whose throwups graced the elevator but they had no idea. I’m imagining some feisty in-patient with his bare fesses dragging a leaking catheter and marking his shattered-rib Picasso insignia with a paint can he found in a supply closet next to the rubbers.)

The other notable downside to the socialist healthcare system would most certainly be the waiting times. After my body scan I was left very close to the room it was performed in by a set of double doors for a number of hours, after which I was wheeled back up Graffiti Elevator and into a hallway running alongside patient rooms, where I was left to rot for several more Xanax-muddled hours without any notice of my condition or the whereabouts of my dear friend Elaine, though at this point I was feeling somewhat uncertain whether or not she had ever even existed to begin with. 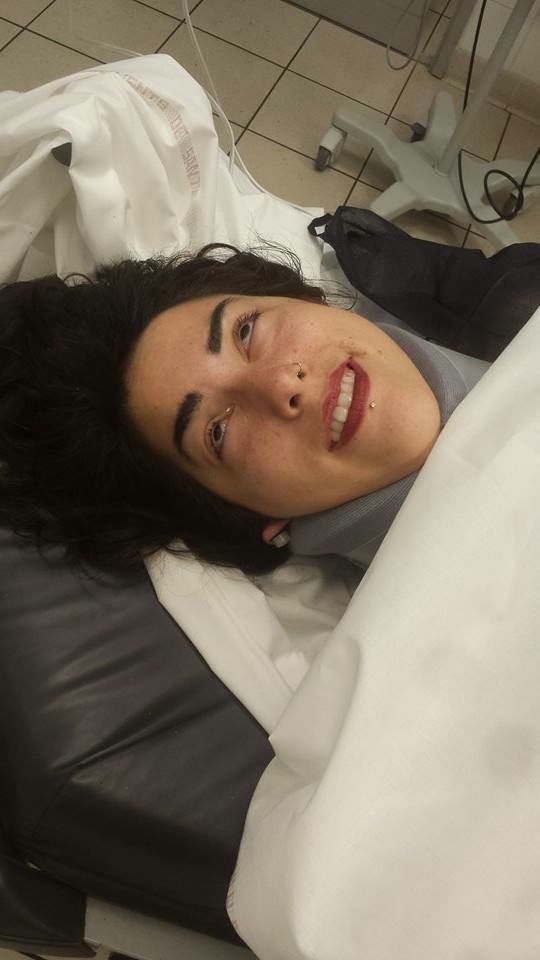