spit them out, these wasted days and wet-green nights rising up from your esophagus to greet against anyone’s will your
lovers and your sisters and your friends and your parents make them
worry for you but never too much just enough to catch a whiff of the smoldering
human brains on stone tiled floors where
the
cold gets in so easy feel it creeping up the carnage contaminated by the time
it grabs your feet and legs to drag you under
i’m okay, i’m okay — you’re shoveling shouting reaching out to grab hold of whatever’s in reach
creamy rose pink with green sparkles dribbles thick makes you feel
safe watching feel the grip slip this is how we
fight our wars with pink with glitter with ooze like
crying all that bile from your eyes the sticky
worms running playground drills up and down your throat
red rover, red rover, why don’t you come over?
red used to scare you always creeping in or up
more often out
that drip drip down your shaking knees that
seeping out the gashes in your stomach like a watermelon past its prime now just remember– don’t eat the seeds, you can’t afford for anything to grow inside you, and neither can the anything– that environment is uninhabitable
for living things

Just returned from Paris, two weeks living with basically the staff of the UN. How I ended up in a Villejuif apartment with two Turks, a Syrian and two Australians (one of whom is also Chinese) I cannot tell you. That last sentence was a lie, I am going to tell you now.

I met Leanne (Australian #1) kind of because we had a class together but mostly because four years ago she suffered the same exact type of spinal injury, except hers was for an acceptable reason (falling down a flight of stairs) rather than a dumbass reason (falling out of a tree.) Leanne is the definition of badassery: 30-something, multiple (legal!) passports, over 60 visited countries under her belt (her life goal is 200, lofty considering there are only currently 196 in existence.) She has been a dirty hippie and a rich bitch, been fat and been thin, and has left a trail of lovers all over the world (basically I’m aspiring to spiritually become her.) Leanne’s magnetic personality and clinically confirmed “unrealistic optimism” about all things in life make her an exceptionally adaptive human being and quick to build a social circle, hence the mixed-heritage carpool plan. We (the Syrian, the American and the other Aussie) “helped” her move out of Lyon to join her Turkish boyfriend Ilkem and his roommate/best mate Erke at their flat in Paris. (Worthy of note: Erke and I shared a white-hot romantic chemistry which culminated in his uncomfortably placing a hand on my shoulder/armpit area in the kitchen on the fifth or so night and stammering, “You’re good.” Mon dieu, Erke. Seductive skills top-notch.)

Aside from this whirlwind romance, the highlights of the trip are as follows.

To think, last year at New Years I was sick with the flu in my brother’s old twin bed, asleep by 9 PM. Feels like eons away now, a different era — or maybe it’s just hard to see through all the torrential merde that 2014 slung about. Shitfest that it was though, it was transformative beyond measure. I see myself so much clearer for its trials and triumphs; my awe and gratitude are too great for words — for the incredible love and incredible loss, all of the pain and the enormous joy. I’m resting with open heart and open mind for new lessons, new adventures, new chaos and new passions. 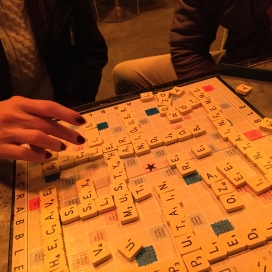 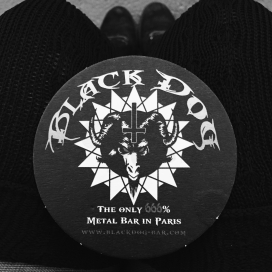 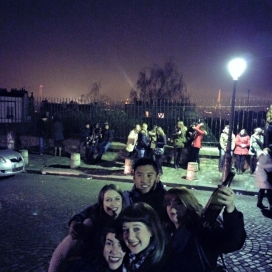 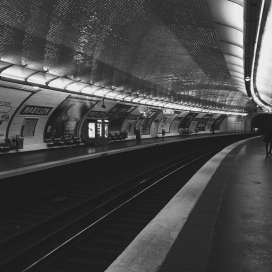 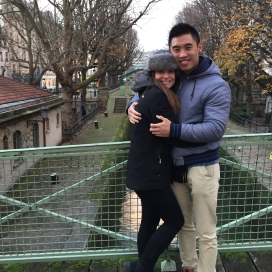 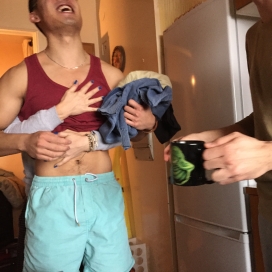 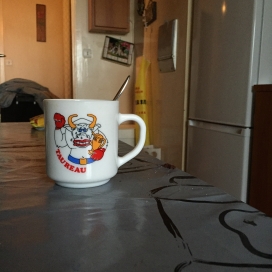 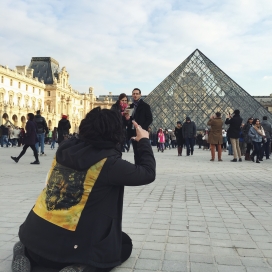 After several more hours bedridden in the ER hallway I set into a panic attack, not unaided by the realization that a bout of bloody screaming might get me some information and/or a room with walls. This suspicion turned out to be true – and I received not only these things but also a young swoopy-haired boy who tilted me haphazardly around in the hospital bed, wrestled a bedpan under my naked ass and skedaddled with naught but an awkward murmur of “good day”. The next nurse that walked in asked me urgently “Qui a fait ça??” “Who did this?” but appeared unamused when I told her it was the lead singer of One Direction. She ran back out and was promptly followed by a male nurse, whose only addition was the classic English “Shit shit shit” – never trust Harry Styles types when there are bedpans involved, folks. You’ve been warned. I soon got my Elaine back and more information than anyone could ever want – namely that the L1 and L2 vertebrae of my spine were broken and that I might need back surgery. Then, as punishment for the hallway screamfest, I was taken off pain medication for three hours to reflect on my discretions in hot raw hell, where I half-died.

My shattered half-corpse and broken spirit were together transferred to a neurological hospital and remained there for six days, a constant flurry of morphine, sweat, sponge baths, catheters, really engrossing drug-induced dreams and one stupidly sexy cleaning guy named Armande (like actually), whom I consistently flirted with but faltered mostly due to catheter-based self-consciousness. You know what they say, it’s not easy to woo the cleaning guy when you’ve got a sack of hot urine dangling off your waist. I spent most of my time otherwise arguing with a particular male nurse who was always on me about not shitting enough, probably because I wasn’t shitting at all. But he vanquished me when, on The Eighth Shitless Day In A Row, as it is written, this happened. Two nursey types pinned my sweaty shelled lobster body against the tiled bathroom wall while a third (pictured) ceremoniously injected The Mega Enema. The Mega consists of no lube, a type of plastic tampon plunger up the ass and three (3) repeated helpings of mysterious butt sauce, each providing prime graphic audio and a very curious sensation of being anally injected with mayonnaise. I remember screaming the words “What fresh hell is this,” which of course nobody understood.

I was released yesterday and will not have to undergo surgery. I will wear my corset brace (soon to be painted as battle armor) for three months, during which time I am strictly prohibited from commuting any way but on foot, including metro, tram, bus, car, bike, and even wheelchair. I can currently walk about thirty feet providing I can sleep for 20 hours immediately afterwards, and will be bed-bathed daily by a home nurse as I am forbidden to take showers.

In short: life of luxury.